Within the blink of an eye, a well-timed strike can send you-

-And now you wake up at a hospital.

This is something all professional fighters have to expect if they happen to be on the wrong end of a punch or kick. However, what happens within our heads when we suffer such traumatic injury?

Is it just a temporary concussion or are there severe, irreversible consequences? 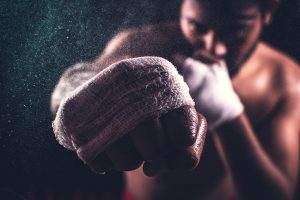 The brain is quite fragile. It is almost entirely made from blood vessels and nerves. It has the same soft, mushy texture that tofu has and is a mass of tissue that controls all your neurological higher functions.

But despite this shortcoming, the brain is remarkably resilient to receiving injury and blackouts. The skull and spinal fluid help in this regard, acting as a type of defence mechanism.

Inside your head right now, your brain is being suspended in a clear, colourless liquid called the cerebrospinal fluid that protects it from coming into contact with the skull.

A knockout occurs when there is enough force to slam the brain into the skull. After the brain slams into the skull, you get a concussion. Brain cells will begin dying from the moment of impact.

This occurs multiple times as the brain bounces off the walls of the skull over and over until the energy of the blow is dissipated. The injury causes an overwhelming number of neurotransmitters to fire simultaneously. This behaviour induces a kind of nervous system overload, creating a system crash in the shape of temporary paralysis.

In other words, your brain receives so many signals it doesn’t know what to do, and as a response, shuts itself down to prevent further injury.

Another mechanism that leads to loss of consciousness has to do with how blood flows into the brain. A reflex area in the brain known as the sinus regulates the circulation of oxygen and blood into the head, but a significant knock to the jaw can jolt the sinus.

This lightning-fast altering of the oxygen and blood flow can be sufficient to cause a knockout. It could take anywhere from a few seconds to a few minutes before someone could regain consciousness — it all depends on the intensity of the blow.

Some people are able to shake it off and are left with a painful headache. Others who are less fortunate can incur serious health problems from the concussion, such as cerebral bleeding and even death.

The blow from a KO-quality punch often leaves its victims with memory issues, mood changes, confusion, and a slower information processing rate.

If you suffer from repeated blows to the head, like athletes in contact sports frequently do, it is possible to shed brain volume in the frontal and posterior regions of the mind as white matter expires.

Permanent damage, like personality changes and dementia, are a few of the risks football athletes or athletes face. A professional fighter’s punch can pack 400 kilograms of force, but you do not have to hit that hard to knock out someone. Instead, precision and timing are a lot more critical.

This is because, as outlined before, knockouts occur when the brain rotates extremely fast. Someone might get hurt pretty bad if struck on the forehead but may not fall unconscious.

The identical blow to the chin or side of the chin area is a different issue. If you are unlucky enough to suffer a concussion, either following a physical altercation or an accident, the best medicine is rest.

If the headaches do not stop after a day or two, check with a health professional immediately.

To prevent serious injuries, one should seek to be properly trained in first aid by professionals. If you work at a high risk workplace that could potentially lead to brain damage through blunt force trauma to the head, consider training your employees with risk training as well.

Geothermal energy is a naturally occurring form of energy that can be harvested from the earth. It exists as a...